There are some currently known issues in the Compute platform. This page describes the most common pitfalls. Known issues for Backup is under the Backup FAQ page.

This bug is described here. The Debian 11 image comes up just fine with IPv4 and IPv6 when creating it from the image but if one tries to rebuild the instance with the "Rebuild"-command DHCPv6 will fail to provide an IPv6 address. This has to do with that the instance the first time created generates a DUID which is used to calculate the last part of the IPv6 adress. When the instance is rebuilt another DUID is calculated which does no match the former DUID and therefore the DHCPv6 services will not provide the address. The solution is to save the old DUID in /var/lib/dhcp/dhclient6.ens3.leases and insert the same value into the same file after the rebuild.

Safespring has trimmed the snapshotting functionality in the legacy platform which will make them go faster. There is still an old bug though with the image service not renewing it's keystone token which makes operations longer than 1 hour to fail. With the current optimizations an image of 40 GB will take about 20 minutes so that will usually not be a problem. When taking snapshots in the GUI Horizon it is important though to start the snapshot operation soon after you have logged in since the token is generated when you login in and not when you start the snapshot job. If you're about to take several snapshots in a row, you should logout and then login again before taking the next snapshot.

To have the best success with snapshots the instance should be shut off before taking the snapshot.

Sometimes when trying to create a volume from an image, the process fails with and "Error" status on the volume. This has to do with backend glance servers and we are working to fix this. If this happens, contact support@safespring.com with the ID of the volume and we will remove the failing volume. Then you can try again. The intermittent nature of the failure has to do with that some backend glance servers does not expand the qcow2 image correctly.

Networking issue with the Debian 10 images¶

Unfortunately the network services installed on the publicly provided Debian 10 images are not working with OpenStack. One option is to install a Debain 9 image and then do an upgrade. Another option is to provide the following Cloud-Init script under "Configuration" when launching the instance. This will make the network services work as intended.

We expect to support user initiated resize operations after a future system upgrade.

The built in resolver in the platform has some issues in the current version. It has been reported to be slow and not to respond to queries in a timely manner. The best work around is to provide another resolver when creating the network to which you connect your instances. Use 89.32.32.32 which is SUNETs resolver. It is done in the third tab in the "Create Network" dialogue: 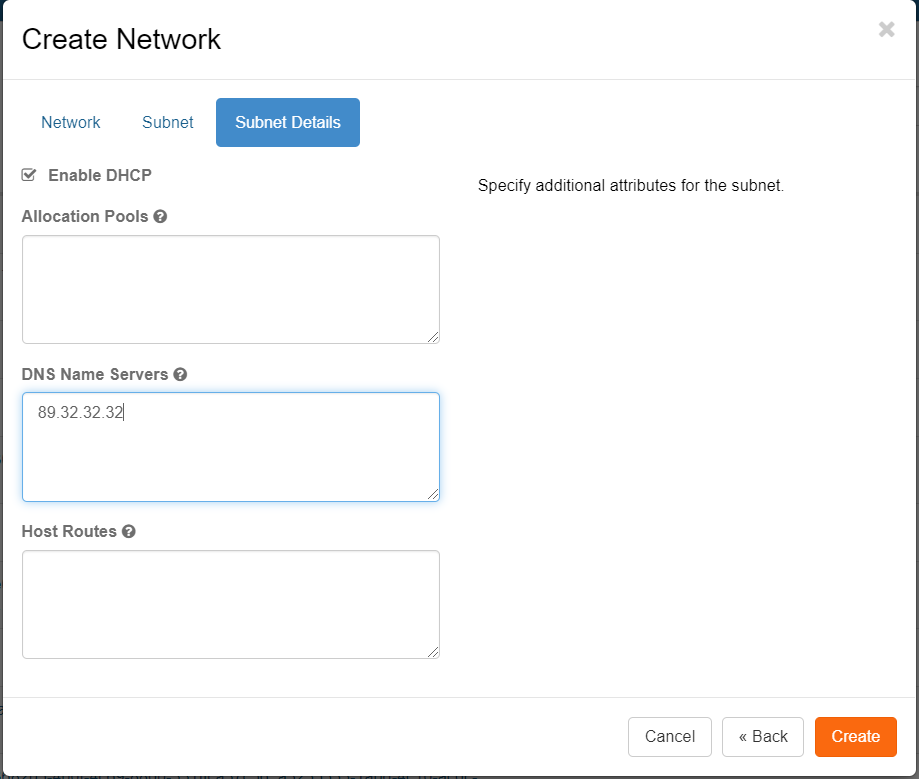 In the picture above we picked Googles resolver but any external resolver would work. Please note that this setting can only set when creating the network in the GUI. In order to update this setting on an existing network, the API must be used.

"Create Snapshot" only works for smaller instances at the moment. In addition, creating snapshots can in some cases create locking issues in the storage backend which will lead to a hard reboot of the instance. This has to do with some compatibility issues with OpenStack and the Ceph backend. With the coming upgrade of OpenStack, this is prioritized to get working for all kinds of instances.

In the drop-down menu in the instance listing there are some operations which are unsupported at the moment. It does not mean that they fail, but they could lead to data-loss and therefore not recommended for use. Problems with using "Suspend" and "Resize" while a volume was attached to the instance have been reported. To ensure that the attached volume persists after the operation it should be detached from the instance before the "Suspend" or "Resize" command is issued.

"Resize" works if you shutdown the instance first. It is prioritized function to get working properly even for running instances. "Shelve" shutdowns the instance and takes a snapshot of it. It works for smaller instances but takes very long time for larger instances and should be used with caution.

For every network you create which is connected to a router with an external gateway another network also will show up in the network listing and network topology view:

These network should be neglected, but never deleted as the NAT-functionality for floating IPs will stop working if they are deleted. This extra information (which only confuses the user) is planned to go away in newer releases of the platform.

Network operations in the GUI¶

Right now the operations to change admin state and to change name of a network does not work in the GUI. We recommend our users to use API Access to perform these operations.

Too recent version of shade results in images not showing¶

We have had an instance where a newer (1.24.0) version of shade caused some images to become unavailable for provisioning when using ansible.

The solution was to downgrade shade to a known good (1.12.1) version.

If you experience flapping ipv6 connectivity it could be resolved either by setting a static default route and not depend on RA. Remove the accept_ra 1 if it exists in you network configuration file or any sysctl settings for accept_ra.

This is an example, check your instance network address and change accordingly.

You may need to delete the RA route first if it exists.

Find your ipv6 address from Horizon or by CLI and insert it as ipv6_address and set ipv6_gateway to the same subnet but ::1 at the end.

Due to historical reasons some of our v1 infrastructure is using cloud.ipnett.[no|se] domains which are no longer in public DNS. Thus, in order to reach these services using API you'll need the following names and IP adresses in your local hosts file.

These are example rc files (settings) for accessing our Norwegian and Swedish Compute services. Replace the bracketed variables with your own information.

For API access to sto1 legacy, you also need to download a certificate to be able to verify the internal certs used. Set the path to this certificate in the rc file setting OS_CACERT as below