This chapter descibes how you can set up specific Access Control Lists (from now on called ACLs) to control access to specific buckets or objects from other S3 users in the platform.

Reasons for doing this could be:

Naming Convention in this document¶

In the examples below words written with capital letters, such as BUCKETOWNERPROJECT, are variables that should be replaced with values matching your use-case.

We are going to use the tool "s3cmd" for all configuration. Use the instructions here to install it. To test these examples you are going to need to have two separate s3cmd-config files. To get the varianbles you need to create those files login to your Safespring account, click "API Access" up to the left, and the "View Credentials". You will be presented with something like this: 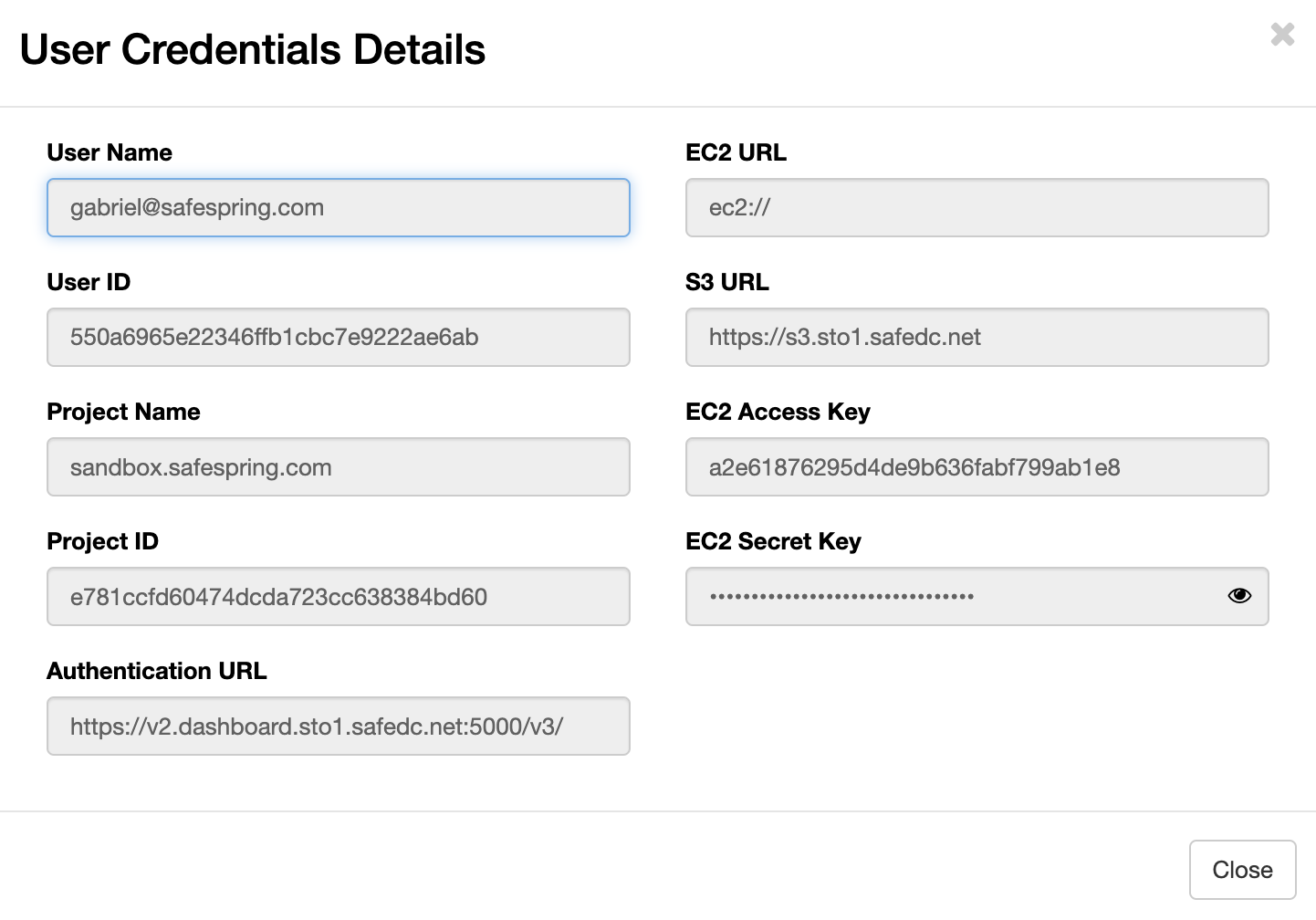 The important variables to write down are:

In the examples below we have named the configuration files owner-s3.cfg and user-s3.cfg. We have not used the Project IDs for the owner and the user yet but will down below when we set up the policies.

Bucket policies are expressed as JSON-files with a specific format:

Let's say that you have created a policy file called policy.json. To let the owner apply this policy the following command is used:

To view the current policies on the bucket issue the following:

To delete a policy from a bucket, use the following:

Now you are good to go to start writing your policies!

Grant another user read and write access to a bucket¶

Create a file rw-policy.json with the following contents. You need to replace the BUCKET_OWNER_PROJECT_ID and BUCKET_USER_PROJECT_ID with the values you fetched from the portal above.

To apply the policy, let the owner issue the following:

The owner now has to send its Project ID, and the name of the bucket to the user.

To list the contents of the bucket, the bucket user should issue:

The user now should see a listing of the contents of the bucket.

Users from other projects (which has the owners Project ID) now can access the contents of the bucket, for instance the file testfile.

Grant one user full access and another read access¶

The first user now can upload a file to the bucket:

The the second user can download the same file, but will not be able to upload anything:

It is possible to generate URLs to object which are presigned with a time limit how long the link is valid. This way it is possible to grant temporary access to single objects without the need to use policies.

When you generated your s3.cfg file above there where two lines that maybe did not make any sense then:

These varibales are important now when we want to create those pre-signed URLs to an object. They force the signing mechanism to use HTTPS instead of HTTP which you need in Safespring's platform since HTTP is not allowed.

Let's say that the owner has a configuration file called owner-s3.cfg where those variables are set and wants to create a pre-signed url for the object s3://bucket/testfile which is valid for 24 hours (or 86400 seconds).

The command to issue is the following:

The command will return an URL that you can send to anyone and will be valid for 24 hours from now. You can also skip +86400 to make the URL permanent.